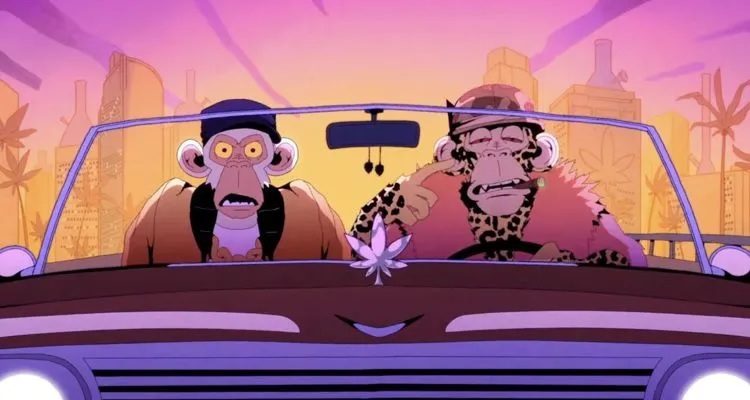 LAGOS (CoinChapter.com) — Grammy Award-winning rappers Eminem and Snoop Dogg made history on Sunday night by becoming the first artists to bring their digital avatars to life on national television.

In detail, during a live performance at the 2022 MTV’s Video Music Awards, the duo treated fans to a spectacle from Yuga Labs’ game Otherside. Notably, Bored Ape Yacht Club’s (BAYC) virtual land was the main setting of the video, as the pair’s journey into the metaverse.

Eminem and Snoop Dogg performed their single ‘From the D2 the LBC’, showcasing some impressive acting as the rappers fell down a swirling multicolored vortex and morphed into their Bored Apes characters. Eminem and Snoop Dogg look dapper in their NFT avatars as fans groove to their performance.

Furthermore, the video gave a glimpse of the Otherside metaverse and a little display of the upcoming game. Additionally, there were also cameos from Kodas, the mysterious creatures created by Yuga that live on the Otherside.

Moreover, it is worth noting that both Snoop Dogg and Eminem are top players in the NFT industry. Snoop Dogg reportedly owns $17 million worth of NFTs. Also, the rapper recently revealed that he is behind the NFT-focused pseudonymous Twitter account Cozomo de’ Medici.

Similarly, Eminem owns 166 NFTs from 32 different collections, according to the DeFi analytics platform DappRadar. Earlier this year, the rapper purchased a Bored Ape Yacht Club NFT worth $452,000. In addition, the renowned rapper recently changed his Twitter profile picture to the Ethereum-based ape.

The data aggregator also revealed that the activities concerning Bored Ape had been steadily declining recently. Notably, the NFT collection sales transaction has plummeted by more than 65% in the last 24 hours and its active wallets by almost 50%.

Notably, the Bored Ape floor price currently stands at 79 ETH as the collection buyers have declined by 45% in the last 30 days. However, the downtrend may end as data from DappRadar shows an uptick in Ethereum’s NFT marketplace.

Moreover, in line with the concurrent decline, the ApeCoin token (APE) is also down by 30% in the last 30 days. Coingecko indicates that the token market cap has also lost more than $800 million in August alone. At the time of publication, APE was trading at $4.7 with a 24-hour trading volume of $220 million.

Meanwhile, data from Google search trends has revealed that retail interest in the metaverse is rebounding. According to Google Trends, the search for the term ‘Metaverse’ has surged to 23 from 21 last week.

Google Trends uses numbers to represent search interest, with ‘100’ as the peak popularity for the specific term. Although, it’s worth noting that high interest doesn’t necessarily imply an increase in asset price or a rise in actual buying.

Google Trends revealed that at the beginning of the year, searches for the metaverse stood at their peak of 100. However, joining the entire crypto market in the recent downtrend, the search for metaverse plunged to a yearly low last month but has since begun recovery.

Google search results also disclosed that Turkey is the country with the most interest in the metaverse. However, a further state-by-state breakdown shows that Singapore, China, Hong Kong, and Cyprus also have considerable interest.