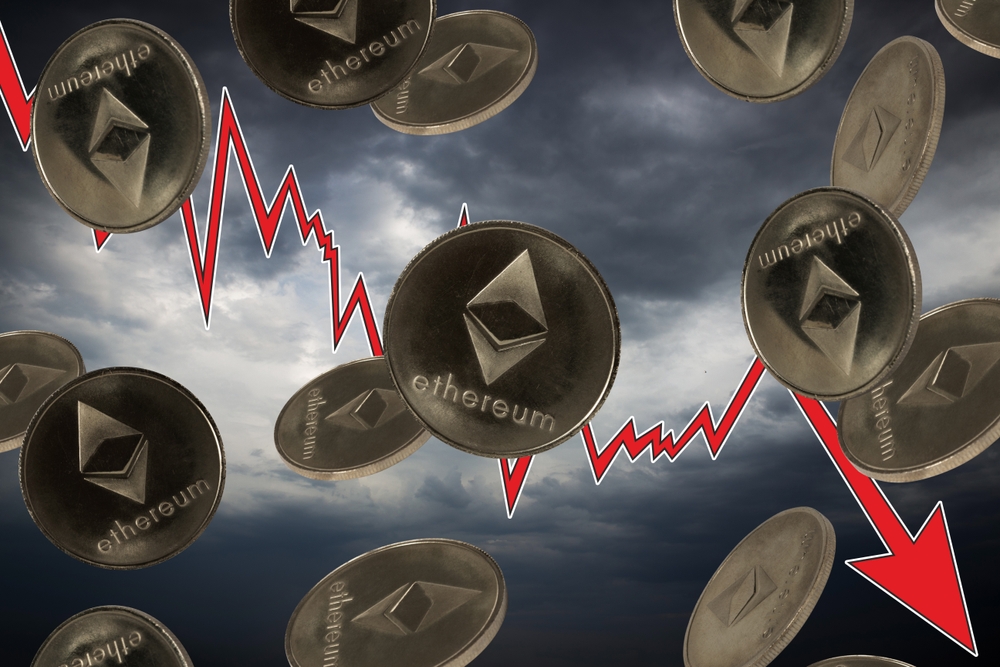 YEREVAN (CoinChapter.com) — Ethereum token Ether (ETH) traded at just over $1,300 on Sup 19 after losing 20% post-Merge. However, technical indicators spell another 20% drop ahead.

Ethereum price could drop to $1K before Q4

While the Merge effect on the price action might not follow just jet, the technicals show an overall bullish direction. In detail, ETH/USD chart formed a bullish setup named ‘falling wedge,’ best visible on the daily time frame.

The formation entails two converging trendlines that significantly drop the price before giving it a bullish boost. Moreover, the expected upside move could equal the maximal height of the wedge. In the case of ETH, the target price would stand at over $4,000.

However, the Ethereum token has not confirmed the setup yet and still fluctuated within the trendlines.

Thus, traders could expect ETH to drop at least another 20% to retest the support close to $1,000 possibly. Moreover, a full drop to the wedge’s lower trendline would bring ETH to $400, a 70% decline from the current price.

The lowering trading volumes on the daily chart testify to the short-term bearish prognosis as traders withdraw from the market. Additionally, Bitcoin’s near-10% drop over the weekend worsened matters, dampening Ethereum investors’ post-Merge return hopes.

Meanwhile, the transition to proof-of-stake apparently hurt the blockchain’s decentralization.

Experts agree that the new consensus put a lot of strain on investors, posing a high staking requirement. In fact, Chris Terry, BPSAA Board Member and Enterprise Solutions VP at SmartFi, voiced his concerns to CoinChapter.

To be clear, most people do not own enough ETH to post the collateral for a validation node.  So the funds are pooled at places like Coinbase and other exchanges.  This is consolidation and consolidation = centralization.  And that is very dangerous.

The expert also asserted that the mentioned “danger” stems from the exchanges being under government control.

According to Terry, Ethereum is now under “transaction censorship,” which overshadows the transition itself. The Network shifted to a “more centralized and vulnerable blockchain subject to a much easier government intervention,” said Terry.

Martin Köppelmann, the co-founder of Gnosis, an Ethereum infrastructure firm, confirmed the centralization fears on Sep 15 and added a pole to probe the public reaction. “Out of the last 1000 blocks, 420 have been built by just Lido and Coinbase,” commented Köppelmann.

Meanwhile, the Merge attracted attention from US regulators, particularly the Securities and Exchange Commission (SEC).

SEC does not approve of the Merge

As mentioned, the Merge commenced on Sep. 15, ensuring the network’s transition to a proof-of-stake consensus mechanism. However, SEC Chair Gary Gensler took issue with the consensus swap and the subsequent Network changes.

He signaled that a feature of the network’s software could lead to tokens being considered securities by the law enforcement agency. Generally, crypto projects avoid the “securities” label, as it carries certain investor-protection requirements. “There is a full disclosure obligation on these projects,” Gensler told reporters after the Merge.

Perhaps the staking in such a system might be considered an investment contract of some kind and that is really an open question.

Keep your hand on the Ethereum pulse, and check out the latest crypto news here.

The post Ethereum (ETH) price could crash to $1K in Q4 — here’s why appeared first on CoinChapter.